Bithumb, formerly the biggest crypto exchange in South Korea, has driven the Kimchi Premium up 30 percent on major tokens, inflating the price of cryptocurrencies.

On June 20, as CCN reported, Bithumb was hacked for $40 million. The Financial Services Commission (FSC) and Korea Financial Intelligence Unit (KFIU) were involved in the investigation of the Bithumb hack and eventually, the exchange reportedly recovered half of the stolen funds stored in digital assets.

However, since then, for more than a month, Bithumb has disabled deposits and withdrawals, only allowing existing users on the Bithumb platform to trade cryptocurrencies. The unforeseen prevention of deposits and withdrawals led the premium on Bithumb to rise substantially, affecting both the local market and the global cryptocurrency exchange market.

On July 28, the situation regarding Bithumb and its premium worsened, as major tokens such as ICON and Aelf displayed inflated price of over 12 percent, and some tokens like Ethos portrayed extreme premium rates at around 600 percent.

On Binance, Ethos (BQX) was being traded at around $1.07 throughout July 28. On Bithumb, the price of BQX hovered at $6.5, nearly six-fold higher than the actual price on other major cryptocurrency exchanges.

It is possible that the prices of cryptocurrencies spiked on Bithumb due to an influx of buyers and lack of sellers on the platform, given that no new capital could have been injected to the Bithumb trading platform since June 20. Since Bithumb does not have support for stablecoins like Tether, the only option for traders is to switch around tokens and major digital assets like bitcoin and ether.

Throughout July, Bithumb was heavily criticized by the local cryptocurrency exchange market of South Korea, and its inability to improve its internal management systems and security measures in time. A month of suspended deposits and withdrawals was previously unheard of in the cryptocurrency market, and the controversial practice of Bithumb has single handedly manipulated the entire global cryptocurrency market.

Over the last 24 hours, bitcoin has rebounded by around 3.5 percent, but the recovery of the market was not triggered by the rise in bitcoin’s value, but rather by the inflation of digital asset prices by Bithumb. 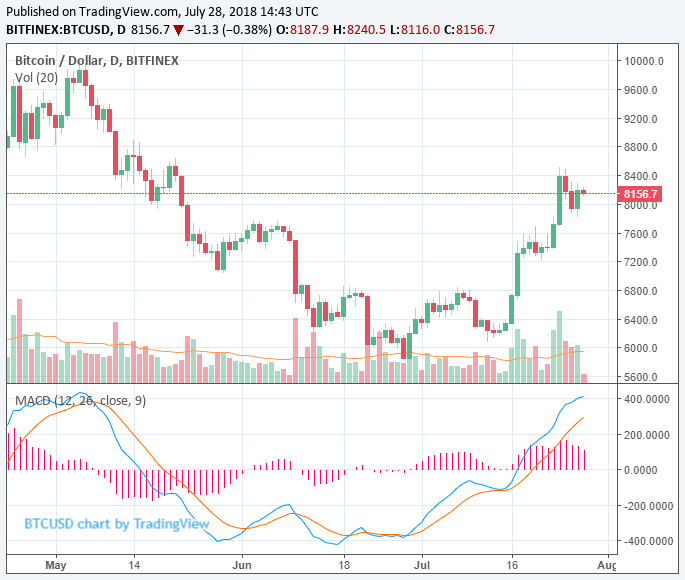 Last month, FSC vice chairman Kim Yong-bum stated that the government has done everything in its capacity to eliminate the Kimchi Premium from the local market, emphasizing that it was the highest priority of local financial authorities.

However, within a month, Bithumb essentially rendered the efforts of the government useless by inflating the price of cryptocurrencies again in the local market.

The market recovery of July 28 does not reflect rising momentum nor volume, but cryptocurrency price manipulation by an exchange in South Korea.